This power generation company is now the biggest private sector power supply company in Turkey with around 3,600 MW of installed capacity. The company distributes its electricity to 21 million people in 21 provinces. It is also involved in the trading of electricity and natural gas and generation of steam. The power generation company's power plants, power transmission infrastructure and other facilities are dispersed across Turkey.

The power generation company's facilities are often located in harsh environments, so the working conditions are often challenging for personnel.

Hytera's smart Push-to-Talk over Cellular (PoC) technology was chosen as the solution. PoC provides strong mobile communications using commercial mobile operator broadband networks. The choice of PoC meant the power generation company could access a much wider area network than if it had chosen a land mobile radio (LMR) solution and it saved money as it did not have to deploy its own base stations and other LMR network infrastructure.

As well as integrating a body camera with a remote speaker microphone to provide video dispatch and real-time video streaming over 3G/4G/Wi-Fi, it also doubles as a PoC device, so users can make push-to-talk (PTT) voice calls and initiate an emergency alarm in mission critical conditions.

The device features a 216° rotatable camera, 1080p high definition image and video capture. The VM780 also supports AES256 advanced encryption technology to protect all the captured evidence in local storage or during transmission.

The device adopts a smartphone form factor with a full 5-inch multi-touch screen and IP68 rated and has a 1.2m drop-proof design. The PoC solution has helped improve daily work efficiency in the field and at the company's headquarters. The PNC550 and VM780 help keep front-line maintenance staff safe by providing instant PTT communications and supporting additional safety measures such as Man Down, Lone Workers and GPS location-based services.

Hytera entered the Turkish market in 2006 and is now widely recognized by clients in many different industries as a highly reliable provider of professional communications solutions, including the energy sector. Hytera was also able to customize its solution and add industry specific apps to greatly improve the customer experience and user satisfaction. 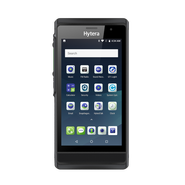